Time for another writeup on this totally well maintained blog 👀. Insider was an exploit challenge during the 2022 Business CTF from HackTheBox named DirtyMoney. It was based on a simple FTP Server with a fun easteregg and different bugs and ways to exploit it.

This writeup describes an exploit which does in fact not use libc or one_gadget or any hooks .

As this writeup is aimed at beginners it's rather detailed and step-by-step. The TL;DR: First we use use ;) to login into the server. Then we use the bkdr command to trigger a format string bug. From that we overwrite the magic var on the stack to enable the list command. Lastly we leverage a command injection in the popen called by list by creating a dir with a semicolon. You can find the complete exploit code at the end. It's pretty self explanatory.

Starting off we get the ld-linux-x86-64.so.2 , the libc.so.6 and of course the challenge file itself. So naturally we load the binary into Binary Ninja and see what's up.

Now that's an FTP Server. We can see all the branches for what is probably the handling of different commands. Let's get a feel for what we are up against by interacting with it first:

Well, looks like we can't even get in. The username check happens here:

We can see a call to getspnam at 0x2e48 which makes sense to check if the user actually exist on the system. But even before that is a curious branch calling another function which I already conveniently named check_backdoor since the challenge was shipped without symbols. And all it does is a simple check against a hardcoded value of ;) . 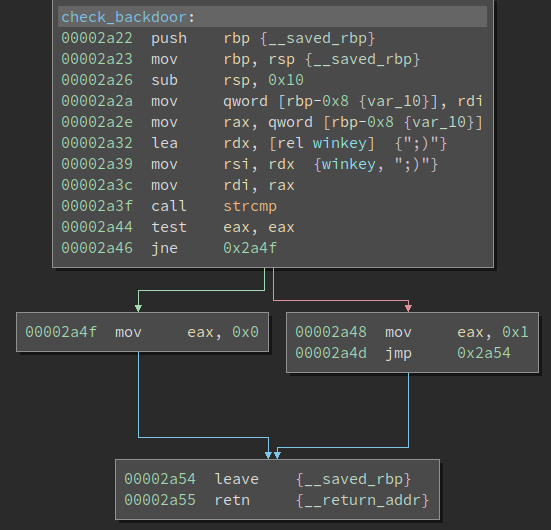 This is of course an easteregg to the infamous vsftp backdoor from 2011 where logging in with :) resulted in an attempt to spawn a reverse shell. Anyway, we can now successfully login and use the FTP Server:

We can change directories, show our current directory and retrieve files. But of course flag.txt does not exist. Interestingly the list command does nothing.

So let's see what is actually supported by the server. 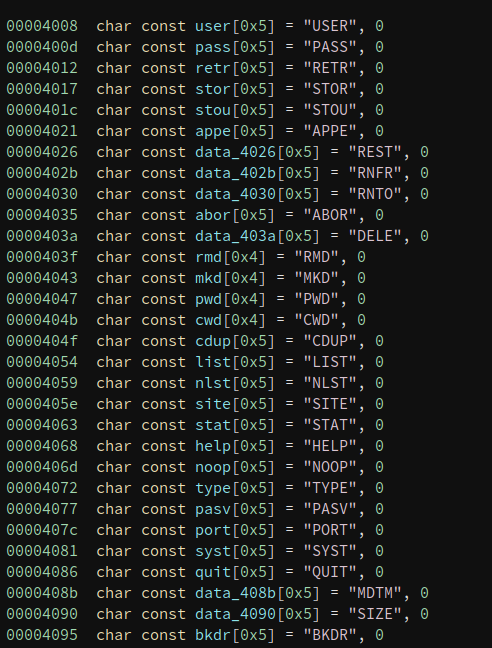 Nothing really unexpected. Curious that list is indeed supported but does not produce any output. We will note that down for later. One command spawns some interest as I've never seen it before on an FTP Server: bkdr . And it's also super close to backdoor . Why would that be? Let's take a look: 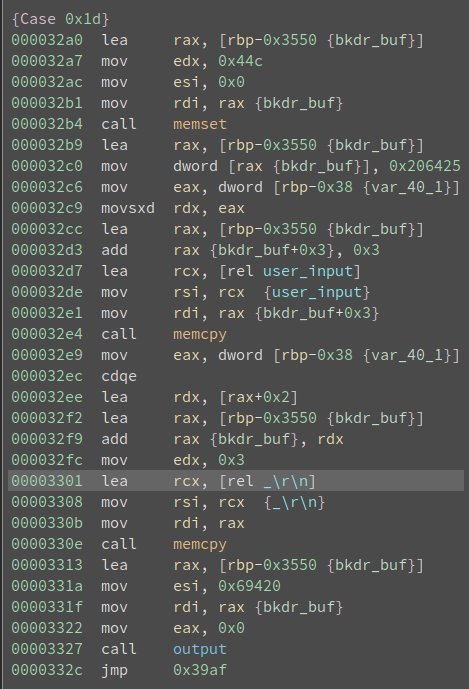 It does some memory magic and calls a function I named output . Because all output does is call vsnprintf and write as can be seen here: 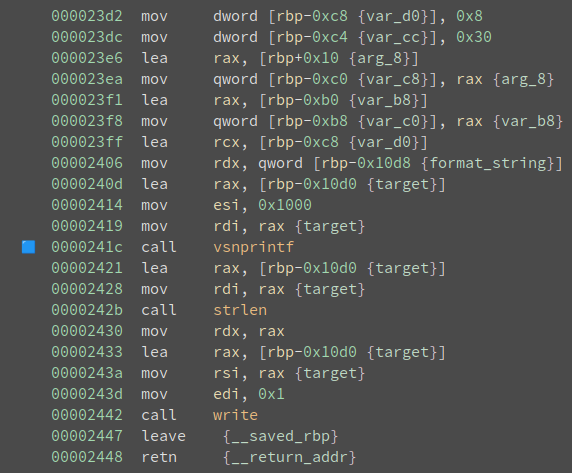 And as is already marked there is a potential for a format string bug. And since bkdr calls this function on our input without any format string it is indeed vulnerable:

Now you will notice by pasting quite a few %p that there is simply nothing on the stack. That is due to the huge buffer assigned for the user input. So let's get to scripting. First, setup the usual skeleton for our exploit:

Now to find our offset we can simply loop the bkdr command and check for our input [And when I say simply, I mean it took me like 2 hours to get over the point that every offset returned (nil) and I had to look further].

Running that gives us:

Now we have an arbitrary write since we can put any address on the stack and reference it with an offset starting from 1031 using %1031$hn to write. And also read since we can read any stack value and print it. Neat. Now you could go the old fashioned route of leaking libc, overwriting something like __free_hook with one_gadget and so on. But fuck format string exploits. At this point I also had put quite a bit of time into reversing the program and checking why the list command doesn't produce any output? Remember the one from before? Yeah, let's see: 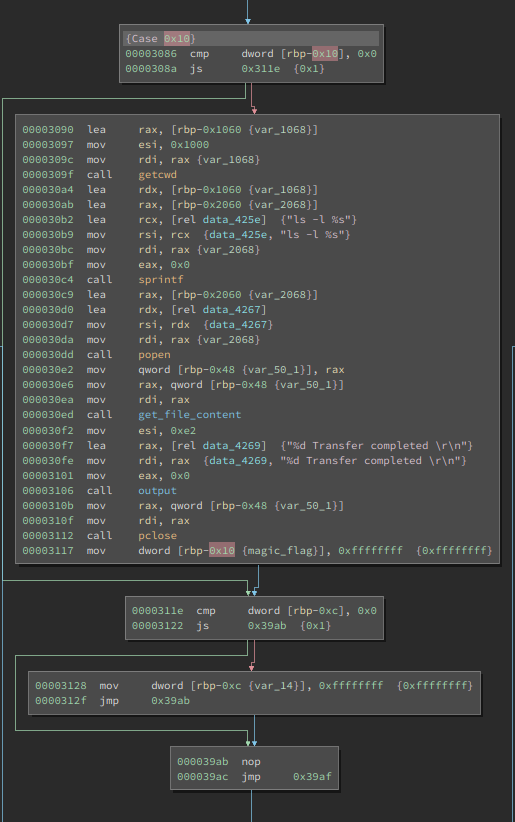 So basically there is a "Magic Variable" at $rbp-0x10 which is checked in a signed comparison against 0, so it basically has to be >0 for the list command to execute. After that the program fetches the current directory with getcwd and then uses popen . Wait what? Yeah, it calls ls -l %s . Since %s is substituted with our current directory we can't do anything bad, can we? Well turns out a semicolon is a totally valid character for folders in linux. Since the server allows us to create directories with mkd and switch them freely with cwd we can actually abuse this for a command injection. All that's left is overwriting the stack variable. But all we actually have to do is make it positive, so we don't have to actually craft a format string :)

Getting the offsets is easy enough with gdb. First we set some breakpoints on the magic var check of list` and the vulnerable vsnprintf call. We use the second to note down an easy to find stack leak. And then we simply calculate the offset to our target address. ASLR will not matter as the stack layout will always be the same.

At the first breakpoint we can see that we have a stack address in r9 which can easily be read with %5$p . So let's note that down

Hitting the breakpoint at the magic var check we can readout the address of $rbp-0x10 , check that it is actually set to 0xffffffffffffffff , so definitely negative. And finally we can calculate the offset to our magic var. Now that we got everything let's move on to exploitation and extend our script accordingly:

Now of course we don't get any output until popen returns and the file (or the pipe in this case?) is read. But since this exploit is 100% reliable (This time for real, I swear), we can just execute it twice to list files and read it afterwards.

Please note the cd .. because we are still in our ;sh directory. ls seems to gracefully deal with this, but for our process there is no get_flag in the current dir. Fun Times! I hope you could follow along and maybe learn something new (For example that you can do command injections with folder names :D). You can find the final script below.